Deliberate alterations to the text can be a result of common theological influences operating independently, or they can be simply imported artificially between text-types and genealogical lines. Thus they are unreliable indicators of either text-type or genealogical dependence, even when they are perpetuated by copying.

On the other hand, accidental errors can indeed be used to show genealogical dependence, and classify manuscripts into text-types, if these errors are of a kind that would be missed, and then perpetuated in further copies.

The peculiar error of haplography (accidental eye-skips) is just the ideal type of error to establish genealogical relationships and offer stable features of a text-type. An error of haplography is likely to be copied unnoticed, especially if the material dropped has no special value or theological impact. It has the further advantage of being rather easy to spot and having unambiguous features: useful cases will have a combination of likely Homoioarcton (similar beginning of a line), Homoioteleuton (similar ending), plus a lack of theological or doctrinal signficance to the omitted material. 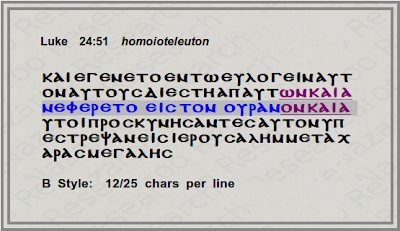 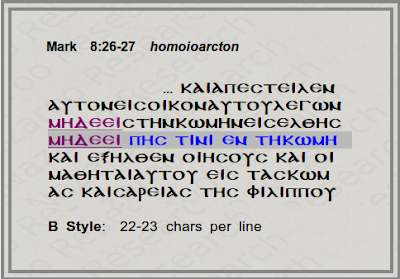 Because of similar stretches of text, the text could be aligned a number of ways and still produce the very same error: 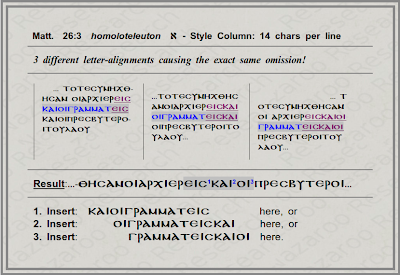 Of some 35 places in Mark where the critical Greek text departs from the traditional text significantly, deleting whole or half verses, almost a third are obvious cases of haplography. The manuscript evidence is also just what we would expect and require for these cases to be clinching. 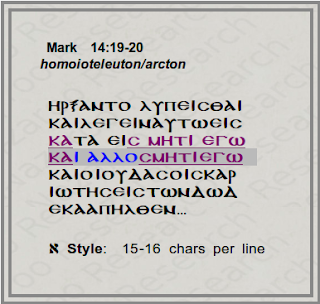 It is not an 'error' in procedure per se, to publish a critically reconstructed text, since one can reconstruct an earlier common (lost) archetype using 'agreement in error' between manuscripts. Such a text will necessarily contain the errors identified as copied from the extrapolated source to the extant MSS.

Westcott & Hort no doubt succeeded in reconstructing an early, error-ridden archetype for Aleph and B, possibly originating in the late 2nd or early 3rd century. (Since then, even earlier MSS that have been recovered that diverge from the text of this ancestor).

This text (Hort's hypothetical ancestor for Aleph and B) however should then have been corrected by carefully eliminating all known accidental errors of the haplographic type, before any further application of the text to 'correct' other texts is to be made.

It is a mistake however, to adopt the plain errors of any intermediary text in a finalized printed Bible, since the whole end goal of textual criticism is to eliminate errors, not re-introduce errors into the text, however ancient they may be. Thus using an 'unedited' critical Greek text is an enterprise in futility, and a clumsy misuse of valuable tools for the improvement of Bible accuracy.

Yet this is exactly what has happened recently with modern versions.  The UBS4 critical Greek text, which is laden with early errors adopted from the common ancestor(s) of Aleph and B, has been chosen as the text to make most modern English translations from.  This is in fact an official policy.

"The Bible Societies translation projects today are “interconfessional.” In 1987 a formal agreement was made between the Roman Catholic Church and the United Bible Societies that the critical Greek New Testament (UBS4) would be used for all future translations, both Catholic and Protestant.

(Guidelines for International Cooperation in Translating the Bible, Rome, 1987, p. 5)."

From: David Cloud,   Answering the Myths on the Bible
Version Debate, p. 175