Homoioteleuton in Enoch and Scholarly Use of Scribal Tendencies 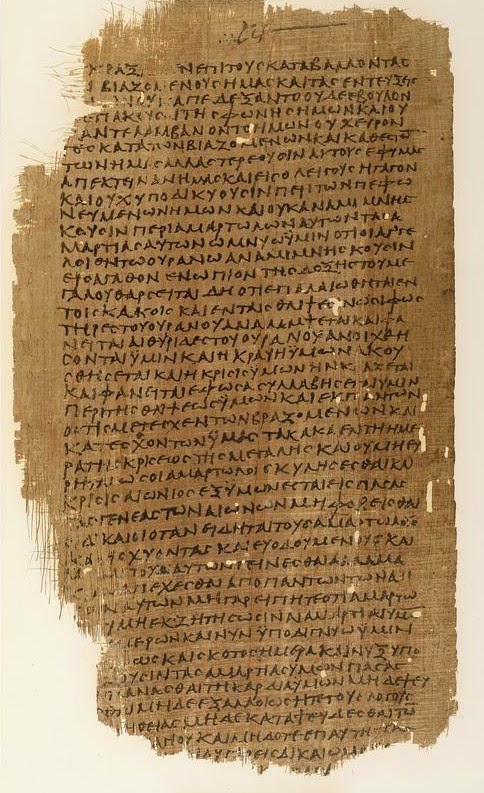 It is both enlightening and remarkable,
that when scholars examine other texts,
which are not considered "Holy Scripture" or "Divinely Preserved",
such as the Book(s) of Enoch,
the exact same problems and habitual copyist errors occur,
and these are just as easily and confidently identified,
based on the same probabilities.

In other words, the common errors of OMISSION,
usually caused by simple fatigue, in which a copyist
loses his place, and more often than not skips a line unnoticed,
are just as frequent in these other documents.

Such consistent and 'reliable' copyist errors form the basis
of all textual reconstruction of non-Biblical, classical, and secular texts.

So why didn't 19th century Textual Criticism apply this knowledge
in exactly the same way when reconstructing the New Testament text?

The answer sadly, isn't because of the 'special habits' of Christian copyists,
or unforseen and mysterious processes from which classical texts escape,
nor can it be explained by 'deliberate tampering' or other conjectures.

The sad fact is, when all the errors of omission are taken in total,
its obvious that together they comprise of a large body of ACCIDENTAL variants,
and no 'systemic' trend or trait can be demonstrated.

Neither is there any 'systemic' bias or editing or other tampering involved.

While some passages containing important doctrines were sensitive to errors,
and this created suspicion among both copyists and 'Editors' like Jerome,
the fact remains that even taking all the omissions and mistakes into the text,
it remains exactly the same group of documents it was before:
It teaches in the main the same doctrines, presents the same history,
makes the same miraculous claims, and inspires the same religion.

One cannot for instance say that the majority of errors were "Arian",
or "Sabellian" or "Gnostic" in slant, nor can anyone make a claim that
all the errors are 'Roman Catholic' or based on superstitious beliefs.

These textual variants remain random in their impact as a group,
and the most likely explanation for the entire group is simple accident,
for the most part errors by omission due to the eye skipping a line or
skipping over a similarly ending pair of words in a line of text.

Thus R.H. Charles in his characterization of the extant surviving manuscripts
for the Book of Enoch, was able to categorize the variants mainly as
homoioteleuton-style omissions, and not scribal creativity.

Similarly, Knibb many years later made the same insightful observations:

In describing the Akhmim Manuscript (Codex Panopolitanus) of Enoch,
he states:


Contrary to claims of "scientific Textual Criticism",
the real reason that editors have unilaterally dismissed longer readings
in favour of shorter ones, was not a knowledge of scribal habits,
but rather a prejudice against the text so great that it overwhelmed all
reasonable judgement in regard to the actual evidence.

The Critics and Editors were LOOKING for the shortest possible text,
to ELIMINATE any and all texts supporting miracles, incarnations,
and other obvious Christian doctrines they had already regarded as
suspicious, superstition-based, contrary to 19th century materialism,
and from their view encumbering the text with supposed 'superstitions'
and legends, mythology which had accrued over centuries of collecting,
through marginal comments and imaginative conjectural emendation.

However, the evidence of the textual tradition and transmission itself
supports no such process. The stories of Jesus and the teachings of Paul
were exactly as they are from the start.
The only accretions and 'editing' must have taken place within a few 100 years of Jesus' time.

These were in the main things like the gathering together of the Paul's letters into
a single document, and the rewriting of the gospel of Mark to include more teachings
and sayings of Jesus.

Even the most extremely edited and shortened text
is still basically a New Testament of nominally Christian content
complete with miracles, and in spite of the best efforts
of skeptical scholars, the New Testament remains a non-denominational Christian handbook.
Posted by Nazaroo at 4:32 PM 0 comments