Here in this interesting minuscule MS, we can see a marginal note, apparently from the Corrector ('Diorthhtes'): see the small block of darkened text to the right of the triangular text on folio 115:

Here is a closeup of the text itself: 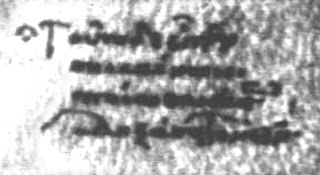 In discussing this marginal note, Wieland Willker on his Textual Criticism Yahoo group explains the gaffe:


"I now know what this is.  It is a correction.
The scribe omitted 21:19a due to parablepsis (TOUTO ... TOUTO).
There is an insertion sign after θελεις, which is also in
front of the marginal text.


I should've consulted Lake first; he mentions it in his collation:

and this is linked to a footnote saying,

"The second volume, which begins on f. 117, is partly written in the small writing of the marginal addition on xxi. 19. Possibly it is by the same scribe, but I think more probably by the DIORQWTHS and perhaps the rubricator of the first part."

Could it have been customary, I wonder, for the proof-reader to add the rubrications upon pages at the same stage in which he did the proof-reading, perhaps as a way to perceive, at a glance, whether a page had or had not been proof-read? Yours in Christ, James Snapp, Jr. (msg #6276)

It appears from the text it may not be a first generation singular, because the scribe has apparently inserted "KAI" in the space, probably to improve the sense of the copy he is reading, and having trouble understanding.  In other words, it was the previous scribe who made the original accidental omission.

Below is a possible reconstruction of the layout in the master-copy that caused the homoeoteleuton eye-skip, and the text lost in the main copy.

This is a great example, which shows the typical structure and the procedure when such errors were noted.   It also illustrates that the same common errors occurred also in the much later copying stream, with scribes facing the same problems in every era.