These minority readings seem to be a perennial favorite among modern critics who prefer the world's shortest text, because they have garnered some support from the Old Latin manuscripts.  This support is rather suspect however, in the first place because the Latin was a translation from Greek, and so rather dependent upon the quality of early Greek MSS, and also secondary as a translation.   This extends further when we note (as it isn't very often in the apparatus) that the Old Latin MS "δ" is simply the Latin side of the very same manuscript "D" (Codex Bezae 5th cent.), i.e., it is really only a single witness, since the Greek and Latin have been consciously cross-harmonized to agree with each other.  Thus the citation, It-d  is still D.

The original F.H.A. Scrivener describes the parallel Latin column in Bezae as follows:


"its own parallel Latin translation is too servilely accommodated to the Greek text to be regarded as an independent authority"  (Plain Introduction, vol.1,  p. 103)

That a few other Old Latin MSS have the same reading will not be surprising if Codex D was at one time used as a reference in the Latin West.

The three omissions of interest here are:

These have the unusual feature of the letter count being a multiple of 24-25 letters.  That is, the column-width of the master-copy from which the blunder was made was about 25 letters wide.

As it turns out, two out of three of these have homoeoteleuton features, and one appears to be a simple eye-skip (of which Codex Bezae sports many). 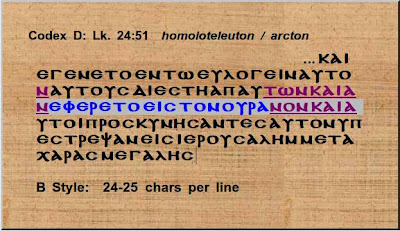 The last example is particularly strong, with both homoeoteleuton and homoeoarcton features.