Luke 6:45 - Another case of early Homoeoteleuton 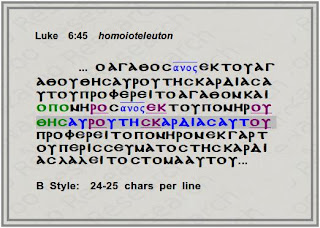 The several other spots showing strong similarity between the two lines, (at the beginning and middle) also corroborate the likelihood of an accidental h.t. error here.
The wide 24-25 cpl format suggests an earlier exemplar from the late 2nd or early 3rd century, something like P66 or P75.  From this estimate of date we have no hesitation in positing "anthropos" here as a Noma Sacra (Standard Abbreviation). Such a MS may or may not have been a collection of all four gospels.  Certainly this case should be grouped with other VUs of the same length already I.D.ed as h.t. errors.

As well as the dropping of "θησαυρου της καρδιας αυτου"  we should also note the other changes this whole verse has suffered at the hands of the Alexandrians behind the Aleph/B text.
The copyist/editor first drops "αυτου" from the first phrase "his heart", changing it to read "the heart".  This appears to be a 'mental edit' possibly even unconsciously done.  Such words are lost all the time as copyists carry on, thinking they've copied something they've heard in their own head, but not actually written down.
More interesting is the second "ανφρωπος" ("man").   The Greek can miss the word without too much loss, but it should also be remembered that in the late 2nd and early 3rd centuries, this would be written as an abbreviation (as shown above) "ανος".  As such, it could easily have been accidentally skipped by homoeoteleuton in the line above, because of the "ηρος" immediately preceding.
Thus in the Aleph/B text for this verse, we seem to have TWO homoeoeteleuton, and one brief mental lapse, causing three separate omissions in a single verse.
Its a sad statement about the early copyist, but not a surprising one, given the some 70-80 homoeoeteleuton errors already found in this early ancestor of Aleph/B.

All of this goes again undocumented in the UBS2 Apparatus.
Peace
Nazaroo
Posted by mr.scrivener at 12:40 PM