With the long (56 character) omission of Luke 17:36, we only need look at the previous verse ending to understand the farce.  Fully 26 out of 28 letters, or 93% of the line is identical to that which preceded.
An eye-skip like this could have happened with 2x28 letters per column, or 4x14, or a number of other unlucky combinations.
With this much text being near-identical, the text itself could be in dozens of different alignments for a given width, and produce the identical omission.
It would be surprising if more scribes didn't omit this unfortunate chunk of text.   Of course it probably did happen, but on many occasions the proof-reading would have revealed the mistake and the repair would have been made before the manuscript got out the scriptorium door.

An alternate format is as follows.  It would suggest an exemplar something like Codex Sinaiticus, which in turn suggests that this omission occurred later in the transmission chain, perhaps in the early to mid 3rd century.   Even the Byzantine text has picked up this homoeoteleuton blunder. 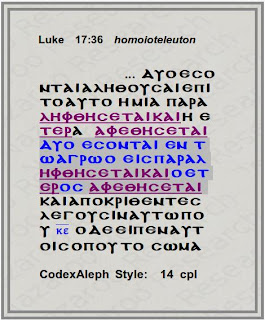