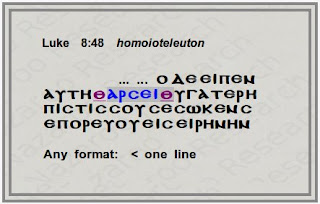 Another obvious but short stutter, over two instances of a relatively unusual letter, Theta.  The early copyist lost his place, and the instance is so short that even a good proof-reader would be unlikely to spot it.
Modern critics have no similar excuse however, having carefully documented the variant, and its obvious homoeoteleuton features.  Its another case where politics has overridden honesty and common sense.  The original text is lost in the Hortian card-shuffle.

This Majority Text reading is omitted and left completely undocumented in the UBS2 apparatus.   Most aren't even aware of the deletion.
Peace
Nazaroo
Posted by Nazaroo at 6:09 PM