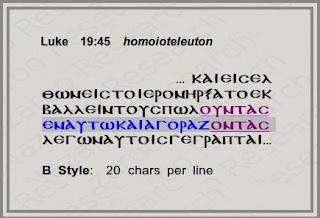 Then He went
into the temple and began to
drive out those those who sold
in it,   and those who bought,
saying to them, "It is written,..."

Virtually all Uncials and Cursives include the line as original.

Aleph/B follow the omission, again providing evidence of at least the influence of a common ancestor through Agreement in Error. The minority reading again furnishes support for an accidental omission, not the original text.

The behaviour of D, L, etc. shows that scribes in the 4th and later centuries were willing to add material if that material was borrowed from another parallel passage. The usual culprits are guilty, but not the majority of copies.

Its easy to see how the omission makes an attractive reading, because it gets all those BUYING goods in the temple off the hook. In the altered text, only the SELLERS are driven out by Jesus: less damning, but unfortunately also less plausible historically.

The UBS text offers not even a footnote, and so naturally, all 'modern' versions based upon it exclude the phrase without even knowing it, including the ASV NAS NIV RSV NEB NBV and a few others.

This kind of systematic omission without documentation borders on fraudulent behaviour. Individuals who are purchasing a new Bible because they want updated language are simply not told the actual extent to which the text has been altered.
Posted by The Dean at 10:42 PM