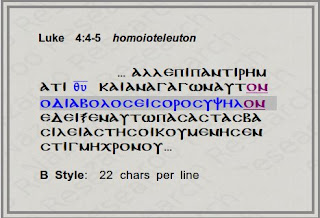 Completely undetectable in the English translation, but a very easy haplography mistake to make from the Greek text.

There is little that is credible in any proposal that a scribal editor might have simultaneously added the Nominal Subject (i.e., an unnecessary filling in of the 'zero-anaphora'), as well as a locative indirect adverbial phrase, all in the same emmendation of the text.

Rather, as with most haplography errors, the omission is purely accidental, catching the Subject and the unrelated predicate phrase in one clumsy skip & chop. That the result is still readable is merely unlucky, helping to hide the boo-boo , but it explains well how it was missed and subsequently copied. Mistakes that badly garble the text are far more likely to be caught and cured before a manuscript leaves the scriptorium. This one flew under the radar easily.

The unusual activity of many 3rd-4th century correctors simply reflects the extent of the confusion caused by the initial haplography, which accidentally removes TWO sentence elements. Even in the 4th century this blunder was suspicious, and the omission of the entire line was not plausible.

A footnote will also be impossible to find in modern versions, as the UBS-2 text offered nothing in the apparatus on this variant either: Its another one of the 'secret' changes, - variants "of no significance for translators" (but adopted anyway)...unless they happen to be interested in what the original text actually was.


Willker recognizes the probable Haplography error, and is suspicious of reconstructions that drop words with little or no textual support.
Posted by The Dean at 10:07 PM