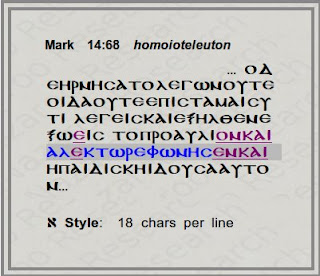 But he denied it, saying,
"I neither know nor understand what you mean."
and he went out into the gateway,
and the rooster crowed.
and the maid saw him,...


Here even the UBS-2 text dares go no further than [single-bracketing] the line as undecided/doubtful. Yet many a modern version stumbles into this trap.

It seems unreasonable to think even an inexperienced Alexandrian scribe doesn't know what a rooster is, and so find himself compelled to expunge the foreigner.

But can any modern Bible editor/translator even hope to present a credible argument that this Markan prophecy-fulfilling line and key plot-element was not an original part of Mark's Gospel?   Please spare us the effort.
Posted by The Dean at 12:21 AM