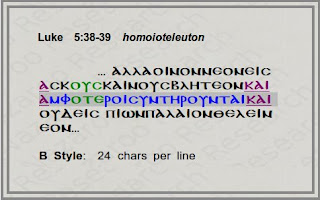 
But new wine must be
put into fresh wineskins
and both are preserved;
And no one after drinking old
desires new;...

This incidental remark is easy to understand as from a wordy Markan/Q source, but impossible to fathom as a deliberate interpolation by editors or copyists (or even as an addition by Luke). The "both" naturally implies both wine and container, not for instance "old" and "new" wines. But no Christian editor would be concerned with such matters, and certainly not an Evangelist like Luke. There is no advantage for Christian dogma in adding this phrase.

It seems more likely that Luke found this in his typically wordy Markan/Q source, and if anything he might have been inclined to simplify and expunge it himself. But just because Luke might have expunged it on second or third pass, does not mean that we should do so. Leaving things like this in place gives us a much more accurate picture of the original sayings of Jesus. Simplification and 'smoothing' is the task of pastors and preachers, not restorers of the NT text.


The typical word-line length and the double trap (homoioarcton/homoioteleuton) in close proximity is a dead giveaway for considering this candidate as a haplography error.
Posted by The Dean at 10:15 PM